What You Need To Know

“I didn’t realize how terrible I felt," Lauster told Spectrum Bay News 9's Katya Guillaume. "I had gotten so use to feeling like this.”

“When I was 18," she continued, "I went to college and I got into a relationship who initially was emotionally abusive, and about a year into that relationship, he became physically abusive.”

A bottle turned to several, and marijuana turned to cocaine, “Which was one that stuck with me for a while,” Lauster said, looking back at those dark days.

She said 2018 was when she reached a point when that changed her life.

“My grandmother, who was very special to me, had just passed away and I couldn’t stop. I was literally out of control. My dad looked at me and he said, You either gotta go get help or you gotta get out.'”

Her third rehab was a success. While it could’ve been easy to relapse during the pandemic, Lauster laced up her Hoka’s.“I had run some 5K’s before," she said, "And so I just went out in my neighborhood and did the best I could to run a mile.”

A mile turned to five, then 10, and now she's is preparing for a runner’s biggest stage. 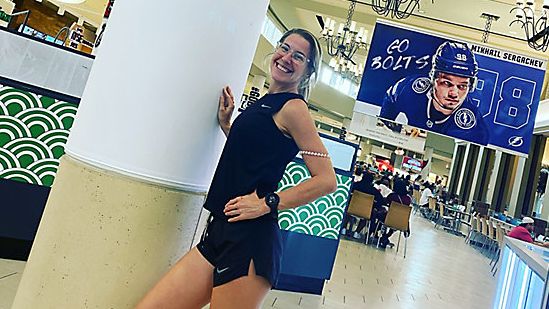 “My mother had tagged me in a post on Facebook that was talking about the Gronk Nation Youth Foundation and how they were making it so people can run The Boston Marathon, and I just sent my application in and I got a call the next day,” Lauster said.

She is running 16 miles a day to prepare for the big event and is hoping to raise $10,000 for the youth foundation, a charity that gives back to kids in need.

“I’ve been someone who has needed help before," she said, "And there was a community of people there for me so it feels really really good to be able to give back.”

The 2021 Boston Marathon was pushed back to October this year due to the pandemic, Lauster is hoping to meet her goal before the big race.

You can click here to donate and here to learn about the Gronk Nation Youth Foundation.