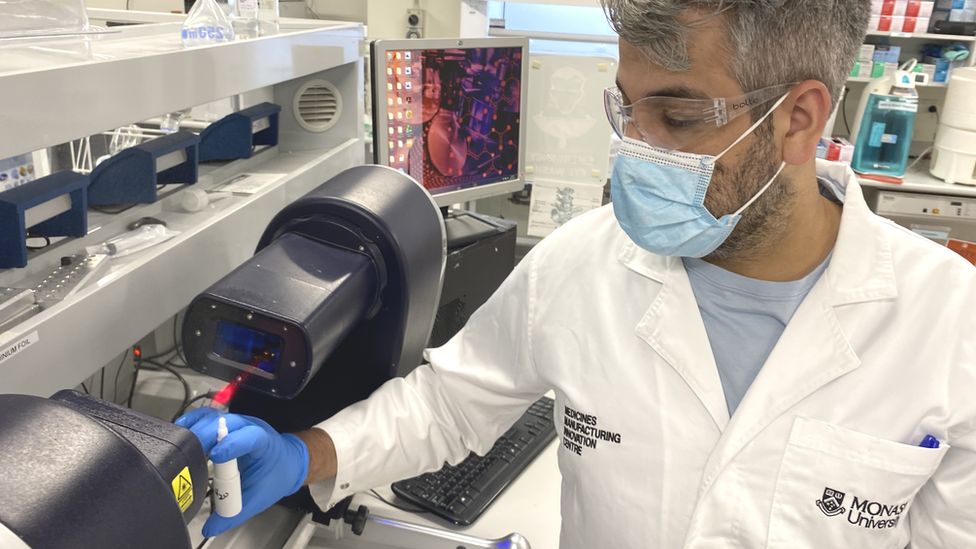 Heparin is a widely available drug that could help fight Covid, researchers say

The nasal spray uses the cheap drug heparin in an attempt to neutralise Covid's spike protein.

When sprayed into the nose of a Covid-infected person it appears to make them non-infectious, the researchers say.

The trial will not conclude until mid-2022. If effective, it could be used with vaccines and other measures.

Researchers hope the spray could help both as an early treatment and as a nasal mask to stop the virus spreading.

It could be applied "anywhere where you mix with the public in a crowded situation", lead researcher Prof Don Campbell told the BBC.

"For people like me who are afraid of Covid, the idea that I might take a squirt before I go shopping or to the football is going make to feel a heck of a lot less anxious. It's a tool that gives me control."

Though other nasal sprays are being tested globally in the fight against Covid, this the first to use heparin - a readily available drug given to people with clotting disorders.

The researchers say that when heparin is inhaled, it doesn't go into the bloodstream. Instead it sits in the nose - with the aim that the virus latches on to it instead of human cells.

People will take two puffs, three times a day to see if it works to prevent household transmission from infected to non-infected residents. If it proves effective, it will be extended to wider social settings.

"One of the wonderful things about heparin is it is already available on the market as an approved product for another purpose, it doesn't require refrigeration and can be stored in plastic vials so it can be distributed very widely and effectively," Prof Michelle McIntosh, another researcher on the team, told the ABC.

"It's also in a handy format that people understand," says Prof Campbell. "We can just say to people: get an inhaler and squirt it up your nose."

Prof Campbell said he had already been using the spray on himself, and he'd had no side effects so far.

"I've been using it for 20 months and my nose hasn't fallen off and I haven't bled to death," he said.

"We are very confident that it will work."