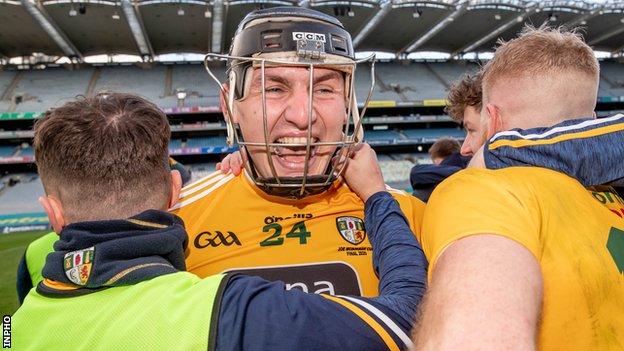 The image of the scene that greeted Domhnall Nugent as he woke up on his grandmother's porch remains vivid in his memory.

"The look in her eyes was pure hurt. My uncle Eamon who I have a very close relationship with was crying," recalls the Antrim hurler.

"It's a vision that I think about every day."

Nugent was 20 years old and living out of a rucksack having spent everything he had on an alcohol and cocaine addiction that had brought him to rock bottom, where he was left to feel that life itself was no longer worth living.

That morning, seeing the devastating impact his downward spiral had on his family, proved a catalyst for recovery and remains a crucial, if deeply uncomfortable, life event.

"Every time that I am getting it tough, or any time that I do think about maybe having a drink it's a gentle reminder that I don't want to put anybody through that pain ever again," Nugent told Good Morning Ulster.

Last December, Nugent provided one of the defining, most heart-warming images in the strangest of GAA seasons. Antrim had just clinched the Joe McDonagh Cup and Nugent, a second half substitute, fell to the floor in a joyous embrace with manager Darren Gleeson. It was a fairytale moment for a player who less than two years earlier thought he had lost it all.

From a young age Belfast man Nugent was a talented athlete. A dual-code star, the future looked bright and GAA was the outlet.

"I suppose GAA always gave me that to escape, and that's why I probably performed so well," he recalled.

"Whenever you hit 18 you find drink and you go to university, all of a sudden drink gave me that escape and GAA wasn't really doing it for me anymore.

"Drugs came into it and before I knew it I was sort of powerless to the whole thing because every time I took a drink or took cocaine I was escaping reality and it got to the point where I couldn't live without it.

"Things that I deeply regret that through time I've learned to forgive myself for but for a long time I did beat myself up.

"Lying to people, lending money off people and never paying them back. Cheating, ducking and diving, going to different countries - a lot of things that I wasn't very proud of and it ended up when I looked in the mirror I just couldn't stand that person who was looking back as me. I had no connection with him and I just hated him.

"It's very hard to build a relationship with someone like that in yourself that you just don't like and you're just abusing them."

'The first thing is to be honest with yourself'

A club-mate at St John's, Paddy Hannigan, had recognised Nugent's struggles before perhaps Nugent himself did.

For several years Hannigan had impressed onto his young club-mate that he was always available should he ever need a hand.

"I was always wondering what he was on about saying I needed help. But obviously he had recognised it in me from a few years previous," said Nugent.

It was after waking up to the distraught faces of his loved ones that Nugent decided to seek help. His fear, he said, was that if he did nothing his family would soon be planning his funeral.

"That day when I phoned him [Hannigan] he answered and said "are you ready?" so he knew that I needed the help," Nugent said.

With the help of his club, family and the Gaelic Players Association Nugent checked into the Cuan Mhuire rehab centre, where he spent three months.

"It was a very daunting experience. It was tough and I was questioning myself; I was beating myself up and even going into the assessment centre where you spend two weeks I remember saying to myself 'what have you done? You're 20 years of age and in a rehab centre," he said.

"I stuck through it and it was the best and most rewarding thing I've ever done."

Now, living with his grandparents and continuing on the road to recovery, Nugent can again consider an athletic career that once in the not-so-distant past seemed to have slipped by.

On the pitch he hopes for more opportunities to represent the Saffrons; off it, he wants to help those that find themselves as lost as he once was.

"The first thing is to be honest with yourself," he said.

"The second thing that I say to people that I go and chat to and try to help is you're not embarrassed whenever you go into the pub and are making an eejit out of yourself, spending all your money or owing drug dealers.

"You're not embarrassed running around the streets at three o'clock in the morning so why should we be embarrassed going and asking for help?"