A new investigation has revealed how brown trout in the rivers of the Czech Republic are becoming addicted to methamphetamine that has been consumed and excreted by human beings. These substances find their way into the rivers via wastewater and Pavel Horký, a professor of zoology at the Prague University of Life Sciences, explains that people who use these illicit drugs can unknowingly cause dependency among the fish.

According to the results of the research, published on July 6 in Experimental Biology , acute and immediate consumption of methamphetamine increased brain activity in the fish for a short period of time, while during abstinence brain activity decreased. “Rewards derived from cravings for drugs among the fish could replace natural rewards such as the search for food or mating,” says Horký.

The scientist notes that the direct effect on the behavior of the trout could vary due to many aspects, such as the length of exposure to the drug and its concentration. “The most serious consequence is that the drug alters the natural behavioral patterns of the animals,” he says via email. “The contamination of the rivers with these substances could change the functioning of entire ecosystems.” 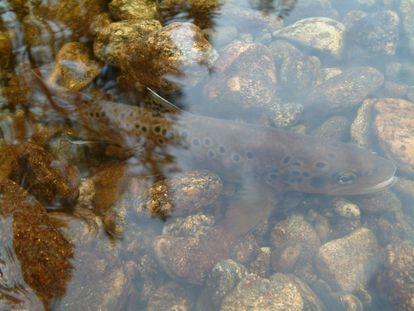 Fish affected by exposure to methamphetamines could see their likelihood of survival and reproduction reduced.

To reach these conclusions, the team led by Horký, in coordination with colleagues from the University of South Bohemia in České Budějovice, designed an experiment that measured the level of addiction among the fish. The scientists divided 120 brown trout in two tanks filled with 350 liters of water for eight weeks. One of the tanks contained hundreds of nanograms of amphetamine per liter, the same concentration of the drug encountered in the Czech Republic’s rivers.

At the end of the eight weeks, the researchers removed the amphetamine from the experimental tank and randomly analyzed the behavior of the fish over the course of 10 days to detect signs of addiction and abstinence. To do so, they designed a tank with two grates that simulated the flow of a river. On one side, the fish were given the opportunity to swim in water contaminated with the same level of amphetamine they had been exposed to previously. On the other side, the water was unadulterated.

Pavel Horký, professor of zoology at the Prague University of Life Sciences

“The control fish did not show any preference for one side of the tank or the other, but the fish that had been exposed to the drug repeatedly chose to remain in the water that contained methamphetamine,” the study concluded. The research also revealed that high levels of the psychoactive substance had been detected in the animals’ brain tissue and that after several days of abstinence the affected fish were less active than the others. This, according to the research team, could “reduce their likelihood of survival and reproduction.”

The conclusions of the study are worrying: “Our results suggest that emission of illicit drugs into freshwater ecosystems causes addiction in fish and modifies habitat preferences with unexpected adverse consequences of relevance at the individual and population levels.” The study is yet another example, the team says, of the transmission of human societal problems to aquatic ecosystems.

Although there are few similar experiments being carried out, Horký and his colleagues agree that the contamination of rivers with these drugs is a common problem globally. “Methamphetamine addiction is considered to be one of the most difficult threats to worldwide human health to control. We know that where there are methamphetamine users, there is also freshwater contamination by methamphetamine,” says Horký. 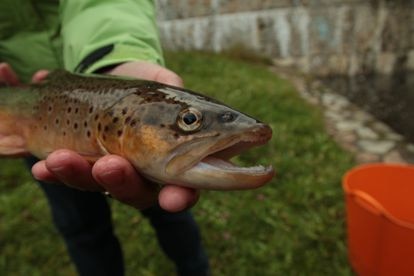 The research team found high levels of methamphetamine in the animals’ brain tissue.

A 2018 report by the United Nations Office on Drugs and Crime revealed that methamphetamine is the most-used synthetic drug in the world and that its consumption has increased exponentially over the last few years. “In 2005, 25 tons of this drug were seized, while in 2016, 159 tons were seized,” the report states.

The findings made by Horký and his team are similar to those of a US research group that recently showed how amphetamines are changing the foundations of life in the rivers of North America. According to this study, published in Environmental Science and Technology , wastewater carries narcotics that affect algae, bacteria and river insects.

Emma Rosi-Marshall, a researcher at the Cary Institute of Ecosystem Studies and lead author of the investigation, explains: “On being exposed to the amphetamines, we saw that algae production stopped. Photosynthesis was reduced in the primary producers of the biofilm, as a result of which there was less growth. This is bad news for the organisms that rely on the biofilms for nourishment.”

The Czech team drew a final conclusion from the study: “Human contamination is often evident in oil spills and plastic waste that washes up on shores, but many of the drugs that we consume also end up in the water, and the current treatment techniques for wastewater plants and rivers are not sufficient to eliminate them.” In view of this, many governments analyze river water to measure the level of drug consumption among populations. In the European Union alone, 67 cities carry out periodic examinations of wastewater as part of their drug control programs.

Horký acknowledges that while the results of the study appear to be conclusive, it will be necessary to carry out many more field investigations to pinpoint the effects of methamphetamine addiction and abstinence that were observed in his team’s experimental research among natural ecosystems. “The Czech Republic is the largest producer of methamphetamine in Europe, an illicit drug generally known under the name Pervitin,” the scientist explains. “The basis of its boom in popularity can be traced back to the 1970s, when it became part of the underground scene. It was consumed by many people who opposed the Communist regime and the establishment; originally it played a similar role to that of LSD in the US during the hippie movement.”