The last bet Lou Remillard placed was a $2,000 online sports wager on a Major League Baseball game. The 46-year-old Las Vegas restaurateur was drunk and broken at the time and said that he no longer cared to be alive.

Having lost that final bet and facing tens of thousands of dollars in debt, Remillard for the first time walked into a 12-step meeting for gambling addiction the next day. It was Oct. 1, 2018.

“That’s the date I protect,” Remillard said on a recent afternoon from the crepe restaurant he owns that is a short drive from the Las Vegas Strip. He agreed on that Monday to stay sober, stop gambling and help counsel those facing the same predicament.

“All we can do is help each other,” he said, a task that has been made even more difficult by the unrelenting stress of the COVID-19 pandemic.

“A lot of people have been alone and struggling with their addiction,” said Remillard, who facilitates online morning recovery meetings most weekdays. “They’re not alone.” Lou Remillard wears a “One Day At A Time” wristband.

Unlike more visible addictions, problem gambling is fairly easy to hide, yet nonetheless leaves about 2 million Americans annually feeling alone, ashamed and, in many cases, broke.

A recent survey from the National Council on Problem Gambling, a Washington-based nonprofit, showed that the risk has doubled since 2018. The survey of 2,000 people nationwide focused on attitudes and experiences gambling both online and at casinos.

Similar helplines in about a dozen states have had a rise in calls from gamblers in their 20s, 30s and 40s since the spring of 2020, said Janet Miller, executive director of the Louisiana Assn. on Compulsive Gambling, which oversees helplines in states throughout the country.

This month, the Massachusetts Gaming Commission reported an increase in people voluntarily excluding themselves from the gambling floors of casinos in the state. Since the “voluntary self-exclusion” program launched in 2015, the same year the state’s first casino opened, nearly 1,300 people have participated. Currently 1,000 residents — the most at any time — are enrolled in the program.

“This milestone is significant but represents a small percentage of those struggling to control their gambling,” said Mark Vander Linden, the commission’s director of research. Increases in gambling addiction have been fueled by major growth in legalized sports betting and by the pandemic, said Keith Whyte, executive director of the National Council on Problem Gambling.

Sports betting spiked nationwide after a 2018 Supreme Court decision cleared the way for its legalization beyond Nevada. Thirty states and Washington, D.C., now allow some form of legal sports betting.

In the first 10 months of 2021, overall sports betting generated $3.16 billion, more than double the sum for the same period last year, according to the American Gaming Assn.’s Commercial Gaming Revenue Tracker.

“Everyone who profits from sports betting — leagues, gambling companies, state and tribal government — should put some of that revenue back into preventing and treating gambling addiction,” said Whyte, who noted that some organizations, including the NFL, have begun to run TV ads during games encouraging responsible betting. Recently, the National Football League Foundation provided Whyte’s group with a $6.2-million grant to, among other things, improve helplines and launch communications initiatives that focus on responsible gambling.

Las Vegas: The Road Back

This is the third and final in a series of occasional articles about Las Vegas emerging from the COVID-19 pandemic.

The lure is tough for many to ignore, and with so many options available, the urge can often intensify.

“One doesn’t become a problem gambler immediately.... It happens over time,” said Alan M. Feldman, a distinguished fellow on responsible gaming at the University of Nevada, Las Vegas.

It also is a behavior that is often ignored. The American Psychiatric Assn. notes that just 1 in 10 people with a gambling disorder typically seeks treatment. 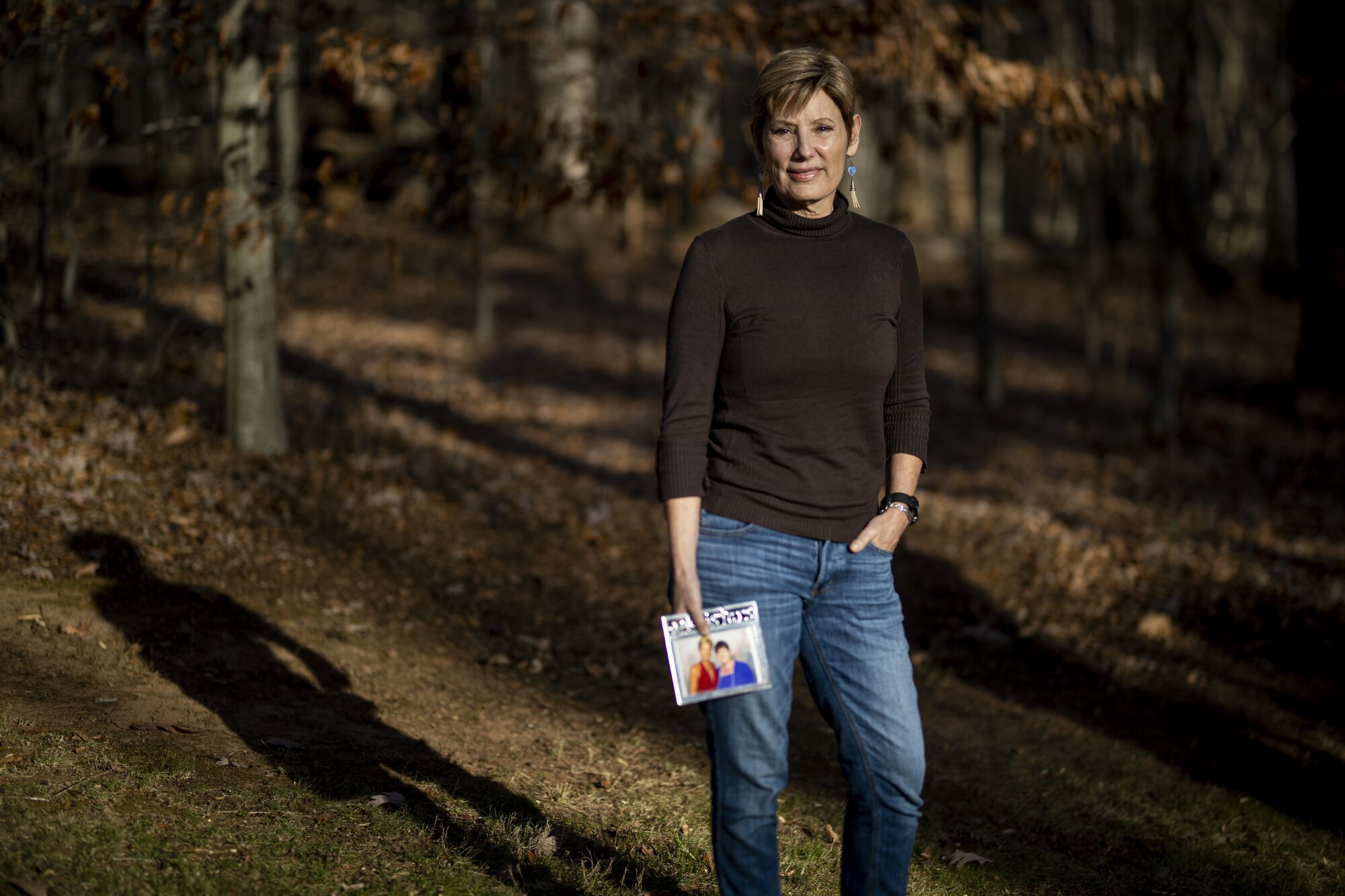 Bea Aikens holds a photo of her sister, Lanie, who died after a drug overdose. Aikens, who struggles with gambling herself, found casino receipts in Lanie’s car.

(Shaban Athuman / For The Times)

“Like a moth to a flame,” said Bea Aikens, who recently moved from her home in the Las Vegas area to Lynchburg, Va., as she continues to address her addiction to video poker. “It was difficult. I was in a very difficult place.”

For years, she hid her problem from family members, even keeping a secret post office box so they wouldn’t see the bills piling up. Even when they learned about her addiction, she said, they couldn’t fully grasp its intensity.

“With gambling, because we are not ingesting anything, people just want to say, ‘Stop,’” she said. “But it’s not that easy.”

In her 25 years of recovery, Aikens has counseled many others who struggle, regularly attending 12-step meetings for problem gambling and working to educate people unfamiliar with their addiction, in hopes that they’ll see that it is a disease rather than a moral weakness. Since March 2020, when lockdowns began, Aikens has seen an increase in the number of people seeking help.

“We are not addicted to money,” she said. “It’s the high from dopamine.... It’s really an invisible addiction.”

And it often overlaps with other addictions, she said. Her sister, Lanie, died of a drug overdose in 2008, after being clean from gambling for several years. When Aikens went through her sister’s car she found dozens of casino receipts, instantly realizing she’d relapsed. To honor her sister’s memory and her own struggles, Aikens now shares both of their stories whenever she finds an opportunity.

“We have to get the word out and let people know they’re not alone,” Aikens said.

In 2018, when Remillard walked into the recovery meetings, Aikens would be there, and he eventually opened up about his own struggles. Lou Remillard lights a candle for customers celebrating a birthday at his restaurant, Crepe Expectations, in Las Vegas.

Remillard has owned Crepe Expectations since 2011. The restaurant found quick success, soon drawing in sizable revenue, which he blew largely on gambling. A few years ago, he said, he was gambling an average of $50,000 a month.

At work, he watched games on TV and placed sports bets online. In the evening he’d head to a casino to play blackjack, often downing an entire liter of whiskey in a single day.

His twin addictions increased and eventually his wife left him, taking their son. The night before he sought help, Remillard said, he gambled for several hours and drank two liters of whiskey in a little over four hours. He hoped he would die.

“When I woke up, I was alive, I was here,” he recalled. “I needed to change — needed to for myself, for my family.”

He was $250,000 in debt, but with encouragement from friends he went to 12-step programs and started to rebuild his life. He tries to live by the teachings — among them, admitting he was at the time powerless over his gambling addiction. He’s now sharing his story with other compulsive gamblers and offering help as he also continues to heal. Lou Remillard in his restaurant office where he gambled on a computer. Now he attends a 12-step program for compulsive gamblers.

Though he and his wife, Jennifer, split up, they remain friends and they work together at the restaurant, Remillard said. Since the start of the pandemic, he has facilitated a daily Zoom meeting called “Breakfast Club” with people across the country. Some share their experiences and daily struggles; others listen quietly.

“What matters is that we keep showing up,” Remillard said on a recent afternoon inside his restaurant. He wears a bracelet that reads “One day at a time.” He got a tattoo that reads “Acceptance” on his right wrist.

When Remillard had to furlough much of his staff during pandemic shutdowns, he and Jennifer worked long hours to keep the business operating. Still, he has made time for his meetings.

He lost his dad in recent months, and as a hobby he’s worked on his dad’s old truck, a 2006 Dodge Ram 2500. He spends much of his time searching for and buying parts from American-owned businesses — as his dad would have wanted, he said — and tinkering with the truck. Lou Remillard stands next to a modified 2006 Dodge 2500 that belonged to his late father.

On the rims of the tires are some words that he lives by in his sobriety: acceptance, faith, surrender.

This is the third and final in a series of occasional articles about Las Vegas emerging from the COVID-19 pandemic. Here is the first story and here is the second story.