Hours after the worst report of new COVID-19 cases in the pandemic thus far, Gov. Tate Reeves gave Mississippi a full-throated endorsement of vaccinations—but offered inconsistent and hostile messaging on the subject of masks. 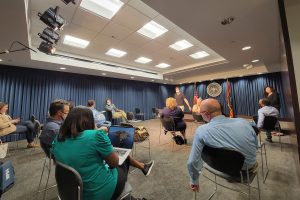 Under fire for resisting statewide safety mandates as Mississippi faced its worst day yet of COVID-19 cases, Gov. Tate Reeves had a press briefing on Aug. 13, 2021, that did not allow reporters to attend by Zoom as they had in the past. Journalists distanced in the room. During the event, the governor was hostile toward reporters several times, including belittling one for wearing a mask. Photo by Nick Judin

Building on his anti-mask remarks at the Neshoba County Fair on Aug. 29 , the governor questioned the value of masks for the vaccinated entirely Friday, at times vacillating between his earlier position that neither the unmasked nor the masked should be shamed and an indignance toward any member of the press who contradicted him.

“If you really want to virtue signal, why are you in this room? Why don’t you go to your house and lock yourself up?” Reeves asked Mississippi Today’s Bobby Harrison, after Harrison questioned him on his position on masking after vaccination, considering the possibility for breakthrough infections. The governor has no training in medicine or health care; he has a bachelor’s degree in economics from Millsaps College.

Behind him to Reeves’ left loomed his own state health officer, Dr. Thomas Dobbs, himself masked and eager to defend the value of continuing to take additional preventative measures after vaccination. Dobbs is an epidemiologist with a Doctorate of Medicine and a Master’s in Public Health from the University of Alabama at Birmingham. 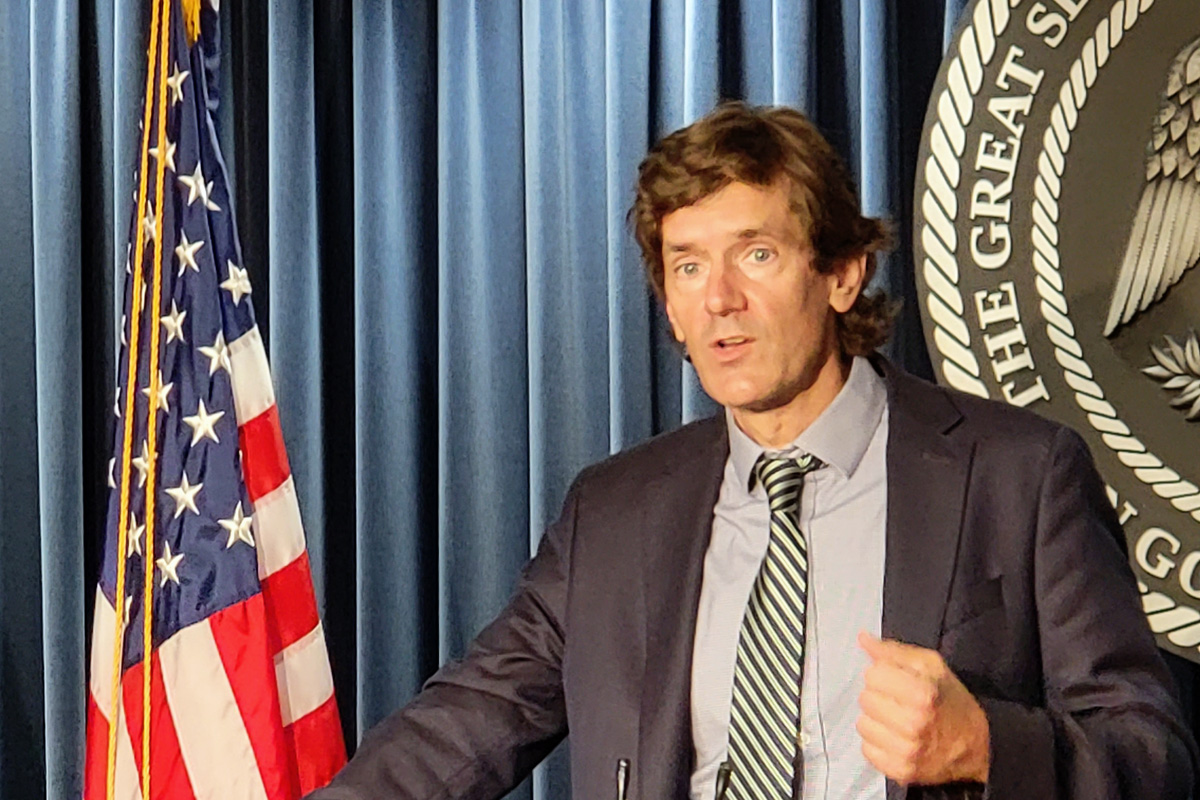 State Health Officer Dr. Thomas Dobbs takes a different approach to virus precautions than Gov. Tate Reeves. “I’m vaccinated: I wear a mask in public. I’m avoiding indoor social gatherings … and I’m not going to go to a bar or sit around with other people and breathe in indoor air,” he said on Aug. 14, 2021, standing on the podium with the governor, who chided a reporter in front of him for wearing a mask. Photo by Nick Judin

“Delta is not gonna last forever,” Dobbs said at the briefing. “I’ll just tell you what I do: I’m vaccinated: I wear a mask in public. I’m avoiding indoor social gatherings. If I hang out (with friends) we hang out outside … and I’m not going to go to a bar or sit around with other people and breathe in indoor air.”

The CDC recommends mask-wearing indoors in part because of the incredibly high viral load of the delta-variant, powerful enough to risk transmission even from vaccinated sources. All available evidence, including from MSDH’s monitoring of Mississippi’s thousands of cases, hospitalizations and deaths, suggest that the vaccine provides powerful protection against all three, but that breakthrough infections are possible.

Reeves and Dobbs never traded verbal blows, maintaining the polite difference of opinion that has characterized their relationship for the entire pandemic.

“Dr. Dobbs and I have worked very closely together for the last year and a half. And I’ve told him every time we’ve ever met, it’s OK to disagree with me. It’s OK to not be exactly in line with me,” Reeves said.

‘At Or Near Our Peak’

The mundane squabbling of the press conference took place only miles away from the University of Mississippi Medical Center’s newly operational field hospital , filling up as the governor spoke with overflow patients. A team under the guidance of the U.S. Department of Health and Human Services, deployed to address the staffing shortage accompanying the hospital’s bed shortage, is there to receive the flood.

The Delta wave rises, groping for a final peak without ceasing. MSDH announced 5,032 new cases Friday, the third record-breaking day in a row.  Prior to recent days, a 3,000-case day was a relic of the dramatic winter surge, pre-vaccine, during the nationwide crush that followed countless ill-advised holiday gatherings. 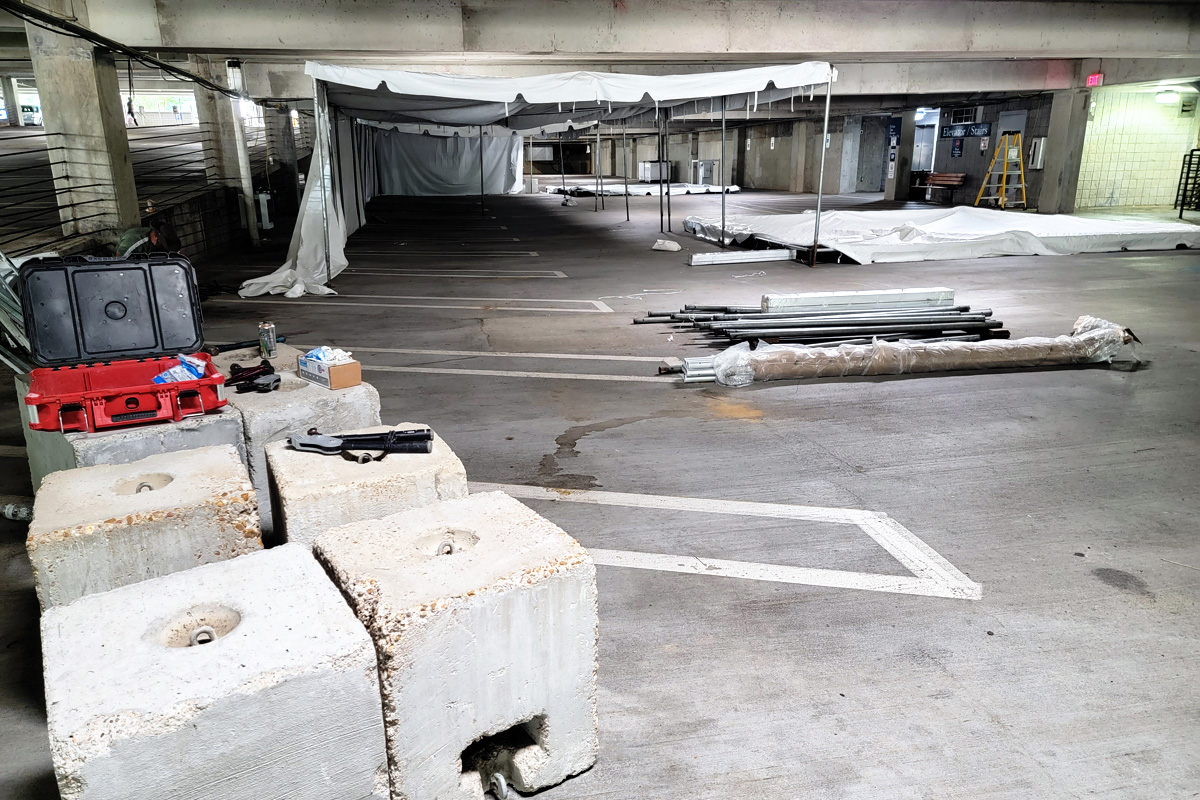 Down State Street from Gov. Tate Reeves’ Aug. 13, 2021, press briefing, the University of Mississippi Medical Center had already converted this garage into a field hospital, overflow for the flood that the state’s primary hospital continues to face. Photo by Nick Judin

The state’s hospitals are already beyond capacity under the burden of delta. The staggering rise in cases at the week’s end promises to burden them further. Reeves acknowledged the severity of the crisis at his press conference, though his language routinely seemed to undercut the unique and pressing danger of the surge.

“We find ourselves today at or near our peak levels from the previous surges in both hospitalizations and ICU patients,” Reeves said. The statement was less wildly out of line with the numbers than the governor’s statement earlier in the week, when he had falsely compared the current all-time peak with August.

In truth, the state had already surpassed every previous COVID-19 milestone—the tents beneath Garage B on the UMMC campus could attest to that. And these hospitalizations are derived from earlier transmission; the burden of the state’s three day run of record breaking numbers remains to be seen. 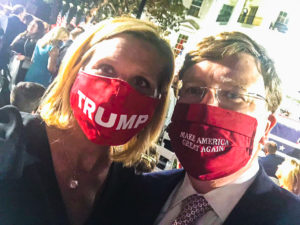 Mississippi Gov. Tate Reeves, seen here with first lady Elee Williams Reeves wearing Trump masks at the White House for the 2020 Republican National Convention, is belittling CDC health advisories that say masks can slow the spread of the delta variant causing Mississippi’s worst COVID-19 outbreak, yet. He says it is OK for him to disagree with the state health officer, an epidemiologist who is calling for mask use. Photo courtesy Gov. Tate Reeves

Repeatedly, the governor challenged the Centers for Disease Control for its own inconsistencies, saying that a lack of certainty threatened the vaccination effort. “I believe personally that the CDC and their ever-changing guidance on masks has actually been harmful,” Reeves said.

Yet Reeves’ guidance has changed as well, and toward less protection of Mississippians. In 2020, the governor stood firm on his decision to issue a statewide mask mandate for schools, part of a policy that made in-person classes a priority. He issued a series of county-level mask mandates, assuring the press and the public that his piecemeal orders followed science in their specificity and scope.

Now, the governor has made it clear that Mississippi will not return to the period of executive orders, regardless of how dire the circumstances are.

“I have no intention based upon the data that I’ve seen of issuing a statewide mask mandate in our schools,” he told the Mississippi Free Press. “Now, if you have a kid and you want them to wear a mask by all means, I think you ought to let them wear a mask.”

Federal aid is coming to Mississippi and will continue to arrive. On Aug. 12, Reeves extended Mississippi’s state of emergency for another 30 days, a measure that public-health leadership warned may be necessary for procuring federal aid for the ongoing delta surge.

“This extension will ease the process of marshalling additional resources for our response … allow our system of care to continue to transfer patients to hospitals where treatment is available, ensure expanded access to telemedicine, and will keep options open for use of the great men and women of the MS National Guard,” Reeves explained on social media Thursday.

But help for an overwhelming flood of the newly hospitalized is likely to be the limit of Reeves’ efforts based on his comments Friday.