Jameson Rybak tried to quit using opioids nearly a dozen times within five years. Each time, he’d wait out the vomiting, sweating and chills from withdrawal in his bedroom.

It was difficult to watch, said his mother, Suzanne Rybak, but she admired his persistence.

On March 11, 2020, though, Suzanne grew worried. Jameson, 30 at the time, was slipping in and out of consciousness and saying he couldn’t move his hands.

By 11 p.m., she decided to take him to the emergency room at McLeod Regional Medical Center in Florence, South Carolina. The staff there gave Jameson fluids through an IV to rehydrate, medication to decrease his nausea and potassium supplements to stop his muscle spasms, according to Suzanne and a letter the hospital’s administrator later sent her.

But when they recommended admitting him to monitor and manage the withdrawal symptoms, Jameson said no. He’d lost his job the previous month and, with it, his health insurance.

“He kept saying, ‘I can’t afford this,’” Suzanne recalled, and “not one person [at the hospital] indicated that my son would have had some financial options.”

Suzanne doesn’t remember any mention of the hospital’s financial assistance policy or payment plans, she said. Nor does she remember any discussions of providing Jameson medication to treat opioid use disorder or connecting him to addiction-specialty providers, she said.

“No referrals, no phone numbers, no follow-up information,” she later wrote in a complaint letter to the hospital.

Instead, ER staff provided a form saying Jameson was leaving against medical advice. He signed and Suzanne witnessed.

Three months later, Jameson Rybak died of an overdose in his childhood bedroom. 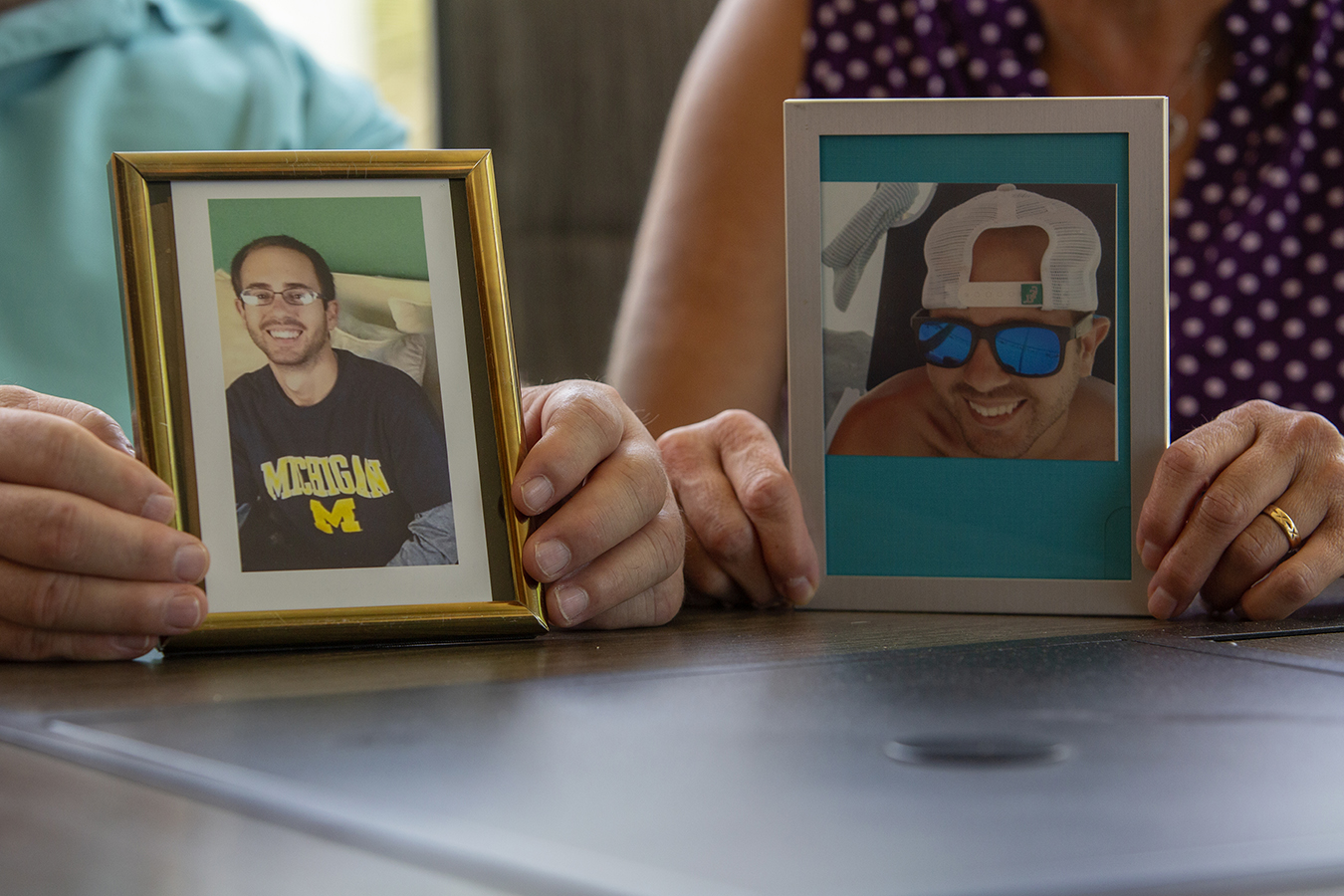 The Rybaks hold photos of their son Jameson at their home in Florence, South Carolina.(Gavin McIntyre for KHN)

That March night in the emergency room, Jameson Rybak had fallen victim to two huge gaps in the U.S. health care system: a paucity of addiction treatment and high medical costs. The two issues — distinct but often intertwined — can come to a head in the ER, where patients and families desperate for addiction treatment often arrive, only to find the facility may not be equipped to deal with substance use. Or, even if they are, the treatment is prohibitively expensive.

Academic and medical experts say patients like Jameson represent a series of missed opportunities — both medical and financial.

“The emergency department is like a door, a really important door patients are walking through for identification of those who might need help,” said Marla Oros, a registered nurse and president of the Mosaic Group, a Maryland-based consulting firm that has worked with more than 50 hospitals nationwide to increase addiction treatment services. “We’re losing so many patients that could be identified and helped,” she said, speaking generally.

A spokesperson for McLeod Regional Medical Center, where Jameson went for care, said they would not comment on an individual’s case and declined to answer a detailed list of questions about the hospital’s ER and financial assistance policies. But in a statement, the hospital’s parent company, McLeod Health, noted that the hospital adhered to federal laws requiring that hospital ERs provide “immediate stabilizing care” for all patients, regardless of their ability to pay.

“Our hospitals attempt to manage the acute symptoms, but we do not treat chronic, underlying addiction,” the statement added.

Jameson had been in and out of treatment for five years, ever since a friend suggested he try opioids to manage his anxiety and insomnia. He had insurance through his jobs in the hotel industry and later as an electrical technician, Suzanne said. But the high-deductible plans often left him paying out-of-pocket: $3,000 for a seven-day rehab stay, $400 for a brief counseling session and a prescription of Suboxone, a medication to treat opioid use disorder.

After he lost his job in February 2020, Jameson tried again to detox at home, Suzanne said. That’s what led to the ER trip.

Treating Addiction in the ER

Hospital ERs across the nation have become ground zero for patients struggling with addiction.

A seminal study published in 2015 by researchers at Yale School of Medicine found that giving patients medication to treat opioid use disorder in the ER doubled their chances of being in treatment a month later, compared with those who were given only referrals to addiction treatment.

Yet providing that medication is still not standard practice. A 2017 survey found just 5% of emergency medicine physicians said their department provided medications for opioid use disorder. Instead, many ERs continue to discharge these patients, often with a list of phone numbers for addiction clinics.

Jameson didn’t even get that, Suzanne said. At McLeod Regional, he was not seen by a psychiatrist or addiction specialist and did not get a prescription for Suboxone or even a referral, she said.

After Jameson’s death, Suzanne wrote to the hospital: “Can you explain to me, especially with the drug crisis in this country, how the ER was not equipped with personnel and/or any follow-up for treatment?”

Hospital administrator Will McLeod responded to Suzanne, in a letter she shared with KHN, that per Jameson’s medical record he’d been evaluated appropriately and that his withdrawal symptoms had been treated. Jameson declined to be admitted to the hospital, the letter said, and could not be involuntarily committed, as he “was not an imminent danger to himself or others.”

“Had he been admitted to our hospital that day, he would have been assigned to social workers and case managers who could have assisted with referrals, support, and follow-up treatment,” McLeod wrote. 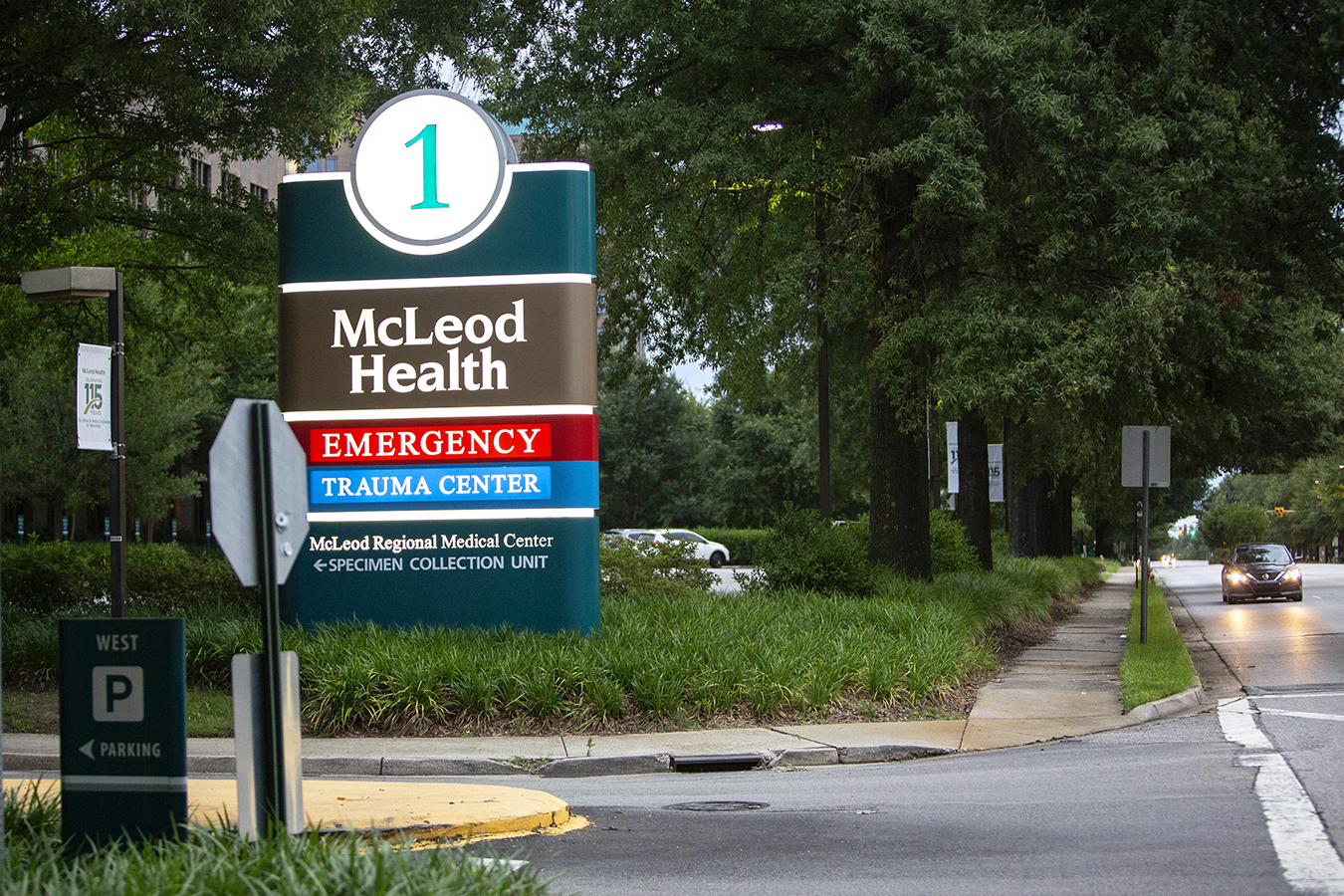 When Jameson Rybak slipped in and out of consciousness from opioid withdrawal, his mother, Suzanne, took him to McLeod Regional Medical Center. He was given fluids to rehydrate and medication to decrease his nausea, but he declined to be admitted for monitoring his withdrawal. “He kept saying, ‘I can’t afford this,’” Suzanne recalls. (Gavin McIntyre for KHN)

Nationwide, hospitals are working to ramp up the availability of addiction services in the ER. In South Carolina, a state-funded program through the Medical University of South Carolina and the consulting firm Mosaic Group aims to help hospitals create a standardized system to screen patients for addiction, employ individuals who are in recovery to work with those patients and offer medication for opioid use disorder in the ER.

The initiative had worked with seven ERs as of June. It was in discussions to work with McLeod Regional hospital too, program staffers said. However, the hospital backed out.

ER staffs around the country often lack the personnel to launch initiatives or learn about initiating addiction treatment. Sometimes affordable referral options are limited in the area. Even when the initial prescribing does occur, cost can be a problem, since Suboxone and its generic equivalent range in price from $50 to over $500 per prescription, without insurance.

In South Carolina, which has not expanded Medicaid, nearly 11% of the population is uninsured. Among patients in the state’s program who have been started on medications for opioid use disorder in ERs, about 75% are uninsured, said Dr. Lindsey Jennings, an emergency medicine physician at MUSC who works on the statewide initiative.

Other parts of the country face similar concerns, said Dr. Alister Martin, an emergency medicine physician who heads a national campaign to encourage the use of these medications in the ER. In Texas, for example, hundreds of doctors have gotten certified to provide the medications, he said, but many patients are uninsured and can’t pay for their prescriptions.

“You can’t make it effective if people can’t afford it,” Martin said.

Too Late for Charity Care

She wanted to help, but Jameson’s father and younger brother had recently lost their jobs, and the household was running on her salary as a public school librarian.

Suzanne didn’t know that nonprofit hospitals, like McLeod, are required by the federal government to have financial assistance policies, which lower or eliminate bills for people without the resources to pay. Often called charity care, this assistance is a condition for nonprofit hospitals to maintain their tax-exempt status.

But “nonprofits are actually doing less charity care than for-profits,” said Ge Bai, an associate professor at Johns Hopkins University who published a study this year on the level of charity care provided by different hospitals.

That’s in part because they have wide leeway to determine who qualifies and often don’t tell patients they may be eligible, despite federal requirements that nonprofit hospitals “widely publicize” their financial assistance policies, including on billing statements and in “conspicuous public displays” in the hospital. One study found that only 50% of hospitals regularly notified patients about eligibility for charity care before initiating debt collection.

McLeod Regional’s most recent publicly available tax return states that “uninsured patients are screened at the time of registration” and if they’re unable to pay and ineligible for governmental insurance, they’re given an application.

Suzanne said she doesn’t remember Jameson or herself receiving an application. The hospital declined to comment on the Rybaks’ case and whether it provides “conspicuous public displays” of financial assistance.

“Not once did anybody tell us, ‘Let’s get a financial person down here,’ or ‘There are grant programs,’” Suzanne said.

Mark Rukavina, with the nonprofit health advocacy group Community Catalyst, said most hospitals comply with the letter of the law in publicizing their assistance policy. But “how effective some of that messaging is may be a question,” he said. Some hospitals may bury the policy in a dense packet of other information or use signs with vague language.

A KHN investigation in 2019 found that, nationwide, 45% of nonprofit hospital organizations were routinely sending medical bills to patients whose incomes were low enough to qualify for charity care. McLeod Regional hospital reported $1.77 million of debt from sending bills to such patients, which ended up going unpaid, for the fiscal year ending in 2019.

Believing they couldn’t afford in-patient admission, the Rybaks left the hospital that night. 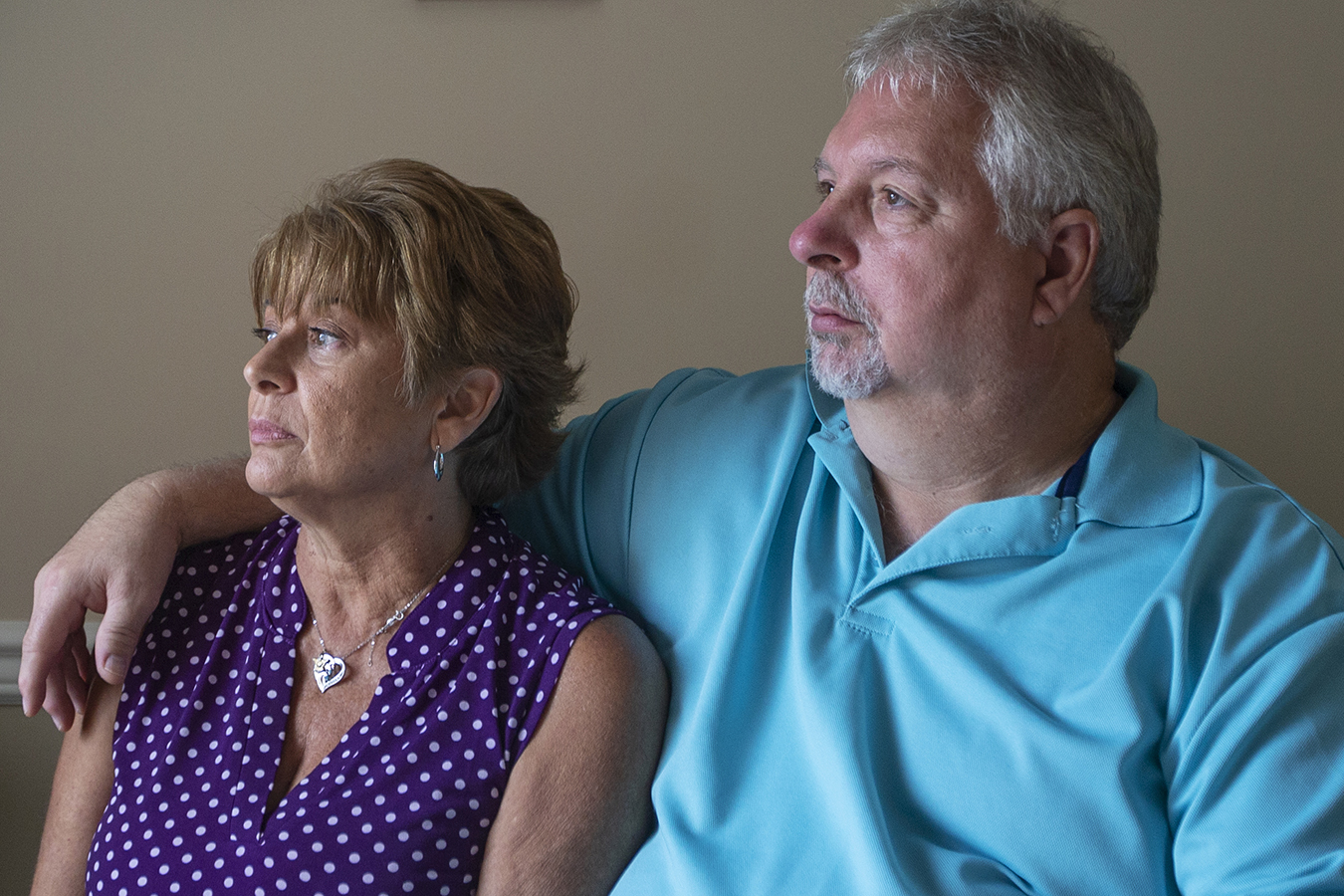 Throughout the night at McLeod Regional hospital’s ER, Jameson worried about cost, Suzanne said. She wanted to help, but Jameson’s father and younger brother had recently lost their jobs, and the household was running on her salary as a public school librarian.(Gavin McIntyre for KHN)

Afterward, Jameson’s withdrawal symptoms passed, Suzanne said. He spent time golfing with his younger brother. Although his application for unemployment benefits was denied, he managed to defer payments on his car and school loans, she said.

But, inside, he must have been struggling, Suzanne now realizes.

Throughout the pandemic, many people with substance use disorder reported feeling isolated and relapsing. Overdose deaths rose nationwide.

On the morning of June 9, 2020, Suzanne opened the door to Jameson’s room and found him on the floor. The coroner determined he had died of an overdose. The family later scattered his ashes on Myrtle Beach — Jameson’s favorite place, Suzanne said.

In the months following Jameson’s death, hospital bills for his night in the ER arrived at the house. He owed $4,928, they said. Suzanne wrote to the hospital that her son was dead but received yet another bill addressed to him after that.

She shredded it and mailed the pieces to the hospital, along with a copy of Jameson’s death certificate.

Twelve days later, the health system wrote to her that the bill had been resolved under its charity care program.

Bill of the Month is a crowdsourced investigation by KHN and NPR that dissects and explains medical bills. Do you have an interesting medical bill you want to share with us? Tell us about it!