"I've played football at the Etihad and tournaments in Ukraine!" Why MAN v FAT is more than just football and weight loss - FourFourTwo USA 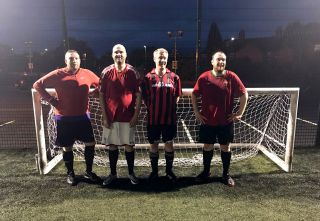 MAN v FAT is helping men all over the country get off the sofa and onto the pitch using football as a way to shed their weight and meet like-minded men all doing the same.

The MAN v FAT football leagues put an inventive spin on the beautiful game. It's where the biggest losers are the biggest winners: the teams who shed the most pounds, score goals off the pitch which count towards their performance on the pitch. Football meets weight loss. simple.

“I cannot begin to explain how much those guys have done for me, not just my weight loss, but supporting me with my own personal life and mental health – at MAN v FAT, it’s about so much more than football."

It's not a programme that judges on technical ability; it's about trying to find a way of making losing weight more enjoyable. Over 5,000 men participate every week in a COVID-safe manner – the vast majority of sign-ups are individuals rather than teams – and 90% of participants lose weight.

Many of those who sign up take part in extra training or the MAN v FAT 11’s setup. These are often run by fellow players to improve their football ability and get extra tips on how best to approach losing weight.

With the Olympics coming to an end, most of us are probably thinking more about sport, fitness and the gymnastics career we never had … so why not join a team? Take your Olympic inspiration and sign up - you’ll play football and lose weight.

The Olympique Mayonnaise team of the Telford league were no exception. Led by Mike Bowness, over the last 13 weeks the team has smashed their goals; losing a combined weight of 60kg which combined with their performance on the pitch, has won them the league title and a place in the cup final next week.

So who would our gold medallists be? Ben Jones and James Stuart both lost 10% of their body weight; 34kg between them. Sean Mcfarlane lost 5% and has his 10% in his sights. Their coach Neil Glover has said it’s “it’s a great achievement, well done to the team”.

Looking at individual performance across the country, our star player was Chris Smedley, Barely Athletic, MAN v FAT Norwich. He opens up about his weight loss journey:

How much weight have you lost?

During the lockdown, like many others, I did gain quite a bit of weight (and a bit more) – I unfortunately went back up to 90.7kg.

With the lockdown ending and being able to once again play football, in the last 15 weeks I have been determined and working hard to achieve my own weight loss goals I set myself. At my last weigh-in on Friday I weighed 71.5kg a loss of (19.2kg) and a healthy BMI of (23.8).

How much time have you spent with MAN v FAT?

I joined MAN v FAT Football in July 2018, so just over three years.

How have you achieved his weight loss?

What you love best about MAN v FAT Football?

The thing I love best about MAN v FAT is the guys. Don’t get me wrong the football is awesome and there’s always great banter to be found. But I cannot begin to explain how much those guys have done for me, not just my weight loss, but supporting me with my own personal life and mental health problems over the last few years. They've literally picked me up when I've been at the lowest points of my life! They've been there for me with advice, support, and it is something that I will forever be grateful for. I’ve been able to do some awesome things over the years due to the networking made at MAN v FAT, like playing in a national tournament at the Etihad, playing a football tournament in Ukraine, and I even managed to get a job and a real shot at a career via a few of the lads in our MAN v FAT club.

What makes your club so good to be part of?

Again, this is just like said previously, what makes this club so good to be part of is just the group of guys we have there. The MAN v FAT moto is "It’s more than football", and this couldn’t be said enough.

What advice would you give to anyone starting up?

My advice to anyone starting up MAN v FAT is, find your motivation, set yourself some small realistic goals and checkpoints, find a diet plan that works for you, and talk to the guys at your club. My motivation was and still is my son Luke. After speaking to a GP and getting a wakeup call, I made the decision that I wanted to live a longer and healthy life for him. I set myself some small weight loss goals with rewards for myself like meals out or treats at the weekend, with one overall goal to achieve. My diet plan was a large part of my success in my weight loss journey, there are loads out there to choose from, it’s about finding one you can maintain realistically and one you actually enjoy. I have tried a number of diet plans successfully, but would highly recommend for someone starting out is trying to maintain a healthy calorie deficit. Finally use the guys at your club! Not just your coach but the players too. It's always a bit weird or scary to talk to others, especially other guys, but you will find so many willing to help and offer advice and support in the MvF community.

What are your future goals?

My future goals are to maintain a healthy balanced diet and keep in a healthy BMI. Keep up regular exercise by playing football on a regular basis.

Do you relate to Chris? If you want to take on the same journey he did, you can sign up to a weekly game of football in a MAN v FAT league if you have a BMI of 27.5 or over. You’ll get expert advice on how to lose weight – with the rest left up to you. The leagues are about wanting to lose weight and enjoying football, not having pressure to stick to strict regimens. You’re not aiming for the Brisbane Olympics 2032, after all.

Joining up also gives you access to SilverCloud, an online mental health and wellbeing app, and The Other Room Gym, an online gym with a wide range of classes, as well as becoming part of a supportive community of thousands on the  MAN v FAT Facebook page . You can  sign up to play with MAN v FAT from just £27.50 a month  at  www.manvfatfootball.org  – or find out more on  Twitter ,  Facebook  and  Instagram .