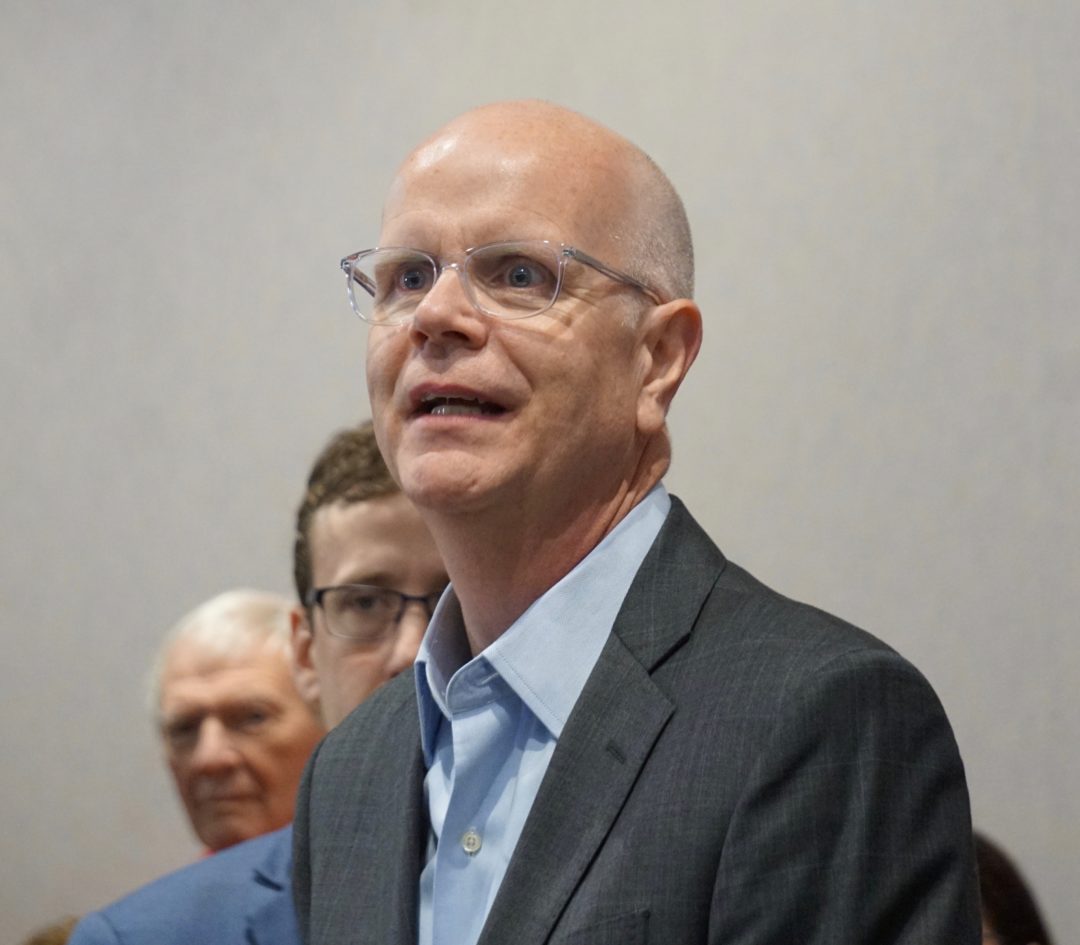 Comptroller Kevin P. Lembo will resign on Dec. 31 due to a medical condition.

Lembo, a Guilford Democrat who has been Connecticut’s chief fiscal watchdog since January 2011, had explored a bid for governor in 2018.

“It has been the honor of my life to serve the people of Connecticut as state comptroller,” Lembo said Friday. “Over ten years ago, voters took a chance on a gay, vegetarian nerd that had never run for office in his life. I’ve worked every day since to represent this office with honesty, integrity, and a focus on the common good. Even now, I love the work that I do and the people I work with. Unfortunately, my health simply won’t allow me to continue to serve.”

According to the comptroller’s office, Lembo, 58, has been diagnosed with a serious and debilitating cardiac condition that has recently been worsening in intensity and severity. He decided to resign after repeated consultations with a team of cardiologists who recommended that he not continue working.

Gov. Ned Lamont must appoint a successor to Lembo to fill the rest of the comptroller’s term, which runs through early January 2023.

“It is with incredible sadness that we receive this news,” the governor said. “Throughout his entire public life, Kevin has dedicated himself to looking out for others, and in his time as comptroller, he has been committed to righting the fiscal ship of Connecticut and fighting to implement policies that tame the state’s revenue volatility and bring financial stability.”

“Kevin Lembo’s service to Connecticut has been remarkable, and his resignation is a huge loss to the state,” Democratic State Chairwoman Nancy DiNardo said. “He came here from New York and jumped into public service as the state’s first Health Care Advocate and for the past 11 years as Comptroller, fighting for transparency, smart budgeting and health care.

“Kevin is a colleague and a friend and his voice will be greatly missed in the public arena.”

Lembo fought throughout his tenure to bring greater stability to the state’s budget. With its large financial services sector and huge pockets of wealth in Fairfield County, Connecticut’s tax revenues have been on a rollercoaster for decades, subject to the highs and lows of Wall Street.

Lembo’s efforts culminated in 2017 with enactment of a new savings program that greatly restricts the legislature’s ability to spend state income tax receipts tied to investment earnings. This program not only has helped Connecticut amass one of the largest budget reserves in the nation but also to deposit nearly $1.7 billion in surpluses as supplemental payments into its pension fund.

The comptroller launched the state’s searchable online database on spending and revenues, a network that has grown significantly during his tenure, also including public-sector salaries, pensions and contractual information. And Lembo also bumped heads with former Gov. Dannel P. Malloy to mandate independent analyses of the hundreds of millions of dollars in economic incentives Connecticut provides annually to businesses.

Senate President Pro Tem Martin M. Looney, D-New Haven, called Lembo “an extraordinary public servant,” adding that “We are a healthier state physically and financially because of all his tireless efforts over the years.”

“He is someone who has always given his all to fight for what he believes in,” said Senate Minority Leader Kevin Kelly of Stratford and Minority Leader Pro Tempore Paul Formica of East Lyme. “Even when we have differed in our approach to a policy, it was always respectful. “

Attorney General William Tong said Lembo’s “ fight for transparency and open government has made us all better public servants, and our state government is stronger because of him.”

Secretary of the State Denise W. Merrill called Lembo “exactly the kind of person we all want in government — a brilliant policymaker, devoted to helping the people of Connecticut and making a difference in his community.”

“I’m extremely proud of what we’ve accomplished together during my three terms in office,” he said. “While I’m disappointed that I’ll be unable to complete this term, the work that’s been done in the last 11 years has made Connecticut a better place to live, work and raise a family, and that’s why I wanted this job in the first place. I feel confident that whoever follows me in this position has all the resources in place to continue this work and build on our successes.”

Lembo became the first openly gay person to hold a statewide elected office in Connecticut when he was sworn in as comptroller in January 2011. He and his spouse, Charles, have three children.

He continued his pursuit of health care initiatives as comptroller, working with labor unions to implement the state’s first Health Enhancement Program, a preventive care and chronic disease management initiative that has improved patient health and saved on long-term costs.

During his tenure, the state also extended its health benefits to tens of thousands of teachers, emergency personnel and other employees at the municipal level. Lembo also has consistently fought to offer similar options to small businesses, nonprofits and individuals in the private sector.

“Everyone deserves access to quality, affordable health care,” said Lembo. “I’m fortunate to have the best doctors in the world to help me navigate this illness. The level of care you receive, and what you’ll pay for it, should not be dependent on where you work. I’ve done my best to wield the power of the office in a way that helps level the playing field for everyone in Connecticut, but there’s far more work to be done.”