A Missouri lawmaker from St. Louis who passed bipartisan limb loss awareness legislation this year is looking at future disability-related bills. State Rep. Rasheen Aldridge (D-St. Louis) was born with a disability and has a prosthetic leg. 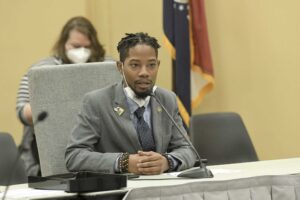 “My goal really after getting this bill passed is to try to figure out how we make health care more accessible for people with disabilities. You know, right now if I didn’t have health care it would be really tough for me to have the prosthetic that I have. It costs around $1,700,” Aldridge says.

Aldridge is referring to the health insurance he receives as a member of the Missouri House.

Governor Mike Parson (R) has signed Aldridge’s legislation that designates April as limb loss awareness month. Aldridge had more than 30 co-sponsors, telling Missourinet that the majority of them were Republicans.

The language from Aldridge’s bill was attached to Senate Bill 72, a bill from State Sen. Karla Eslinger (R-Wasola). SB 72 was signed by the governor and takes effect on August 28.

Representative Aldridge says this is personal for him.

“When I was born inside my mom, the right side of my leg was shorter than the left side of my leg. I have to use a prosthetic to be able to walk. And as a young kid, I had to go through countless surgeries at Shriners (Hospital in St. Louis) just to make sure that when my foot turned around straight, that they had to keep breaking it,” says Aldridge.

He says putting clothes on each morning is difficult and can be painful.

“It takes me a little big longer to get dressed because I have to put the sock on my prosthetic, I have to put the pants on, then I put the shoe on and then I have to put my leg in it. And, you know sometimes it hurts. About ten percent of the time it hurts, so when it does hurt, it hurts into the next day,” Aldridge says.

He’s looking at future legislation that would help disabled seniors get more support in their homes. Representative Aldridge serves on the House Budget Committee.