Anne Cotton had enjoyed her years at an assisted living facility in Corvallis, Ore. But at 89, her health problems began to mount: heart failure, weakness from post-polio syndrome, a 30-pound weight loss in a year.

“I’m in a wheelchair,” she said. “I’m getting weaker. I’m having trouble breathing.” On Sept. 30, Dr. Helen Kao, her palliative care doctor and a medical director at Lumina Hospice Palliative Care, determined that she qualified for hospice services — in which a team of nurses, aides, social workers, a doctor and a chaplain help patients through their final weeks and months, usually at home.

Ms. Cotton, a retired accountant and real estate broker, embraced the idea. “I’ve lived a very full life,” she said. “I’m hoping I’m near the end. I need the help hospice gives.” Her sister died in Lumina’s care; she wants the same support. For older patients, Medicare pays the cost.

But Lumina and other hospices that serve Benton County, Ore., are grappling with pandemic-fueled staff shortages, which have forced them at times to turn away new patients or delay their enrollment — as it did with Ms. Cotton. “It’s devastating,” Dr. Kao said.

Another of her palliative care patients, Ruth Ann McCracken, 91, has declined physically and cognitively since suffering two strokes last year. Last month, her family made an appointment for hospice enrollment.

The day before the appointment, Dr. Kao made a difficult call to Ms. McCracken’s daughter, explaining that Lumina had lost several nurses and could not safely admit new patients, perhaps for several weeks.

Distressed and fearful of delay, the family followed her advice and made an appointment for enrollment with another local hospice, Samaritan Evergreen — only to have that meeting postponed, too, because of a nursing shortage. 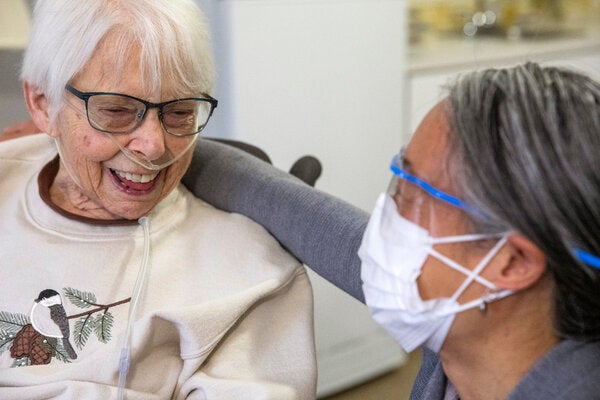 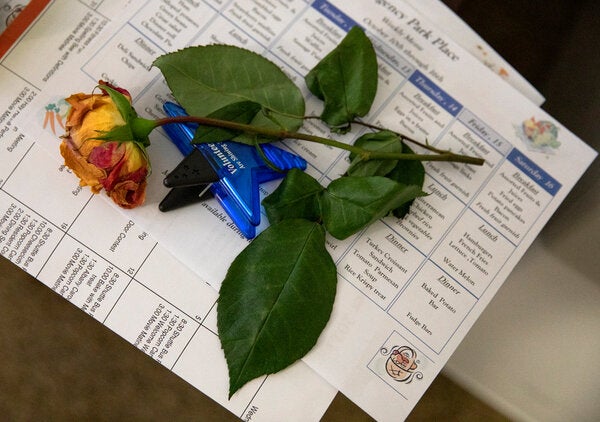 Hospice staff shortages have developed across the country, and while closing to new patients is not a common response, “it’s getting worse,” said Edo Banach, the president and chief executive of the National Hospice and Palliative Care Organization. “If this goes on much longer, it’s going to happen more.”

In a stressed health care system, some routine procedures or elective surgeries can be deferred without much harm. But more than half of the 2.3 million Medicare beneficiaries who die annually rely on hospice care, Medicare reported. To qualify for hospice, patients are deemed to be within six months of death, which cannot be postponed.

Because many put off enrolling — American patients spend only a median of 18 days in hospice — even short waits can mean the loss of valuable care, from pain relief to help with household tasks.

“It causes huge distress to tell a family, ‘We can’t serve you,’” said Barbara Hansen, who directs Oregon’s and Washington’s state hospice and palliative care organizations.

The Center for Hospice Care in northern Indiana, which serves about 2,000 patients annually, has not had to turn away patients. But the smaller of its two inpatient units, a seven-bed hospice in Elkhart, has remained closed since July because of inadequate staff.

The Center had planned to reopen it on Oct. 1, but a newly hired nurse left, so the unit remains unavailable. “I keep thinking it’s going to get better,” said Mark Murray, the Center’s president and chief executive.

In New York State, “it’s a day-to-day jigsaw puzzle that puts a strain on the organization,” said Jeanne Chirico, the president and chief executive of the state’s Hospice and Palliative Care Association. Some hospices, which often pride themselves on enrolling new patients within a day, may take an additional day or two, since admissions are a labor-intensive process. They may send home aides for fewer hours.

Many hospices are trying to recruit staff with signing bonuses; on the high end, EvergreenHealth Hospice Care in Seattle is offering $15,000 for registered nurses and $5,000 for licensed practical nurses. It has not lost much staff, said Brent Korte, the agency’s chief home care officer, “but we may go from our average care load of 12 patients per nurse to 15, temporarily.”

The shortage, hospice administrators say, stems partly from an exhausted staff who visited patients’ homes through the worst of the pandemic, wearing full protective gear (once they could acquire it).

Now Willamette Valley Hospice and Palliative Care, which also serves Corvallis, has lost 25 percent of its registered nurses since the pandemic began and has closed to new patients several times. “The fatigue, the disappointment is hitting us,” said Iria Nishimura, its executive director.

Staff shortages also reflect economic pressures. Hospice nurses typically earn less than those employed by hospitals or traveling nurse agencies, which have raised their wages and bonuses as they also face a pandemic-related lack of nurses.

In Oregon and Washington, for instance, a registered nurse working for a hospice might make $40 to $60 an hour, Ms. Hansen said. Agencies in those states are advertising up to $130 an hour for traveling nurses, she said, and one in Seattle is said to be dangling $275. “No hospice can match that,” she said. 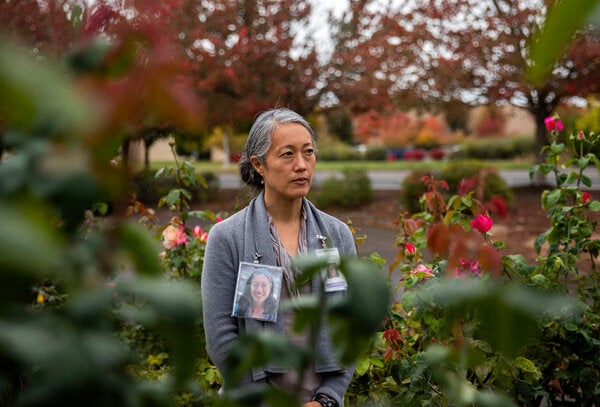 Dr. Kao has had to turn away patients or delay their enrollment in hospice, and it takes its toll on families, patients and caregivers alike. “It’s devastating,” she said. Credit... Alisha Jucevic for The New York Times

Ms. Cotton rubbed her hands during a check-up with Dr. Kao. Credit... Alisha Jucevic for The New York Times

At Lumina, where staff turnover has run 80 percent higher than usual, “we’ve had job postings for months without any applicants at all,” Dr. Kao said. It has begun offering $2,000 bonuses for registered nurses.

Hospice aides, who are usually certified nursing assistants, are being lured away, too, sometimes leaving health care entirely. “When they’re getting paid in the low double digits and Amazon pays twice that, it’s hard to compete,” Mr. Banach said.

Hospice organizations have supported such mandates, and report that most workers have complied. But losing even a few resistant hospice staff — perhaps five percent in New York State so far, Ms. Chirico estimated — could bring temporary closures, wait lists or higher caseloads for the remaining staff. (Rules for the Biden administration’s federal mandate, governing all health care providers that receive Medicare and Medicaid funding, including hospices, are expected soon.)

Hospice organizations received aid through several rounds of federal pandemic relief, but they need more to rebuild their staffs, Mr. Banach said. They could also benefit from changes in immigration law to help bolster the work force.

Those kinds of changes take time, however. Hospice workers require specialized training. Even if scrambling hospices could hire nurses tomorrow, it would take several months for most to be fully ready to work with dying patients.

In Oregon, Samaritan Evergreen Hospice began receiving overflows from other local hospices and, for two weeks in September, was forced to practice triage. “We were taking the most ill, actively dying patients first,” said Karen Daley, the hospice director. Those who weren’t struggling with symptoms and had good support at home waited for several days.

Evergreen’s staff has stabilized for now, and triage is no longer necessary, although it could resume at any time. Ms. McCracken, to her family’s relief, was enrolled on Oct. 8.

Ms. Cotton prefers to use Lumina, so she is still waiting. “I don’t know how many people are ahead of me,” she said. “Basically, I have to wait for people to die, and that’s not a pleasant thought.” 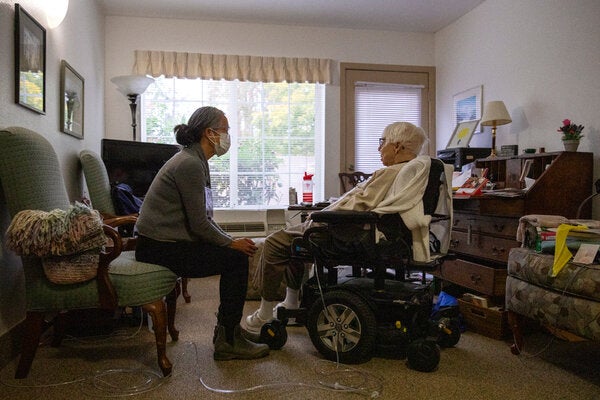 We use cookies and similar methods to recognize visitors and remember their preferences. We also use them to measure ad campaign effectiveness, target ads and analyze site traffic. To learn more about these methods, including how to disable them, view our Cookie Policy. Starting on July 20, 2020 we will show you ads we think are relevant to your interests, based on the kinds of content you access in our Services. You can object. For more info, see our privacy policy. By tapping ‘accept,’ you consent to the use of these methods by us and third parties. You can always change your tracker preferences by visiting our Cookie Policy.