The Delta Variant Isn't As Contagious As Chickenpox. But It's Still Highly Contagious - WBUR 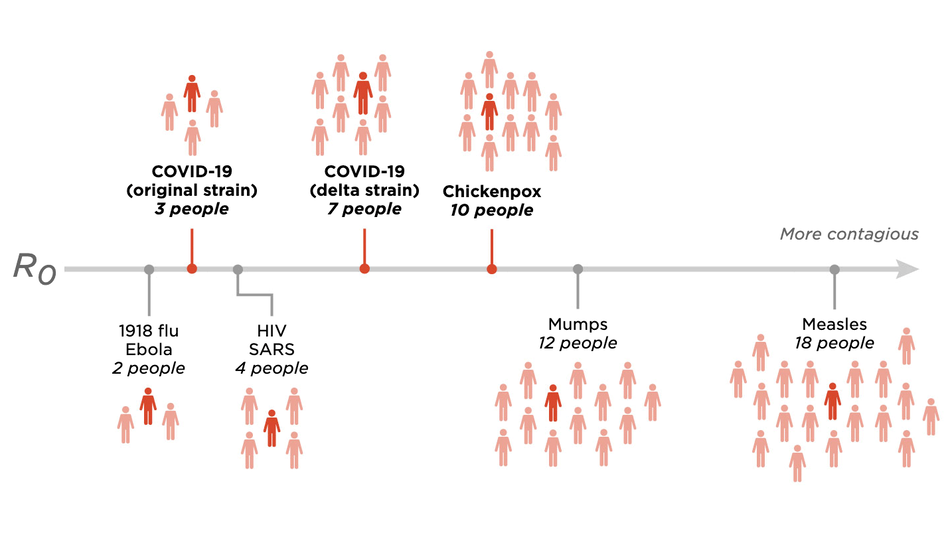 The number of people that one sick person will infect (on average) is called R0. Here are the maximum R0 values for a few viruses. (NPR)

In a leaked report, the Centers for Disease Control and Prevention made a surprising claim about the delta variant of the coronavirus: It "is as transmissible as: - Chicken Pox," the agency wrote in a slideshow presentation leaked to The Washington Post on July 26.

Chickenpox is one of the most contagious viruses known. Each individual can spread the virus to as many as "90% of the people close to that person," the CDC reports.

Is the delta variant that contagious as well?

The short answer is no, says evolutionary biologist and biostatistician Tom Wenseleers at the University of Leuven in Belgium.

"Yeah, I didn't find the CDC's statement entirely accurate," says Wenseleers, who was one of the first scientists to formally calculate the transmission advantage of the alpha and delta variants over the original versions of SARS-CoV-2.

Nonetheless, delta is still highly transmissible, he adds. It's one of the most contagious respiratory viruses that we know of, he says.

When scientists measure a virus's transmissibility, they often use what's known as R0, or "R nought. " It's the number of people a sick person will infect when the entire population is vulnerable to the virus.

"So it's the virus's potential of spreading, given ideal conditions for the virus, when no one has any immunity," says computational biologist Karthik Gangavarapu at the Scripps Research Institute.

For example, the flu has an R0 of about two. Each person infected with flu passes the virus on to two people on average. Some people will infect more than two people, and some will infect fewer. But over time, the average will be about two.

Chickenpox, on the other hand, is way more contagious, Gangavarapu says. Chickenpox has an R0 of about nine or 10. So each person with chickenpox infects about 10 other people on average. Outbreaks are explosive.

For SARS-CoV-2, the R0 has actually risen over the course of the pandemic as the virus evolved. When the coronavirus first emerged in 2019, SARS-CoV-2 was slightly more contagious than flu, Gangavarapu says. "The initial COVID-19 strain had an R0 between two and three."

"For the delta variant, the R0 is now calculated at between six and seven," Wenseleers says. So it's two- to three-times as contagious as the original version of SARS-CoV-2 (R0 = 2 to 3) but less contagious than the chickenpox (R0 = 9 to 10).

So why did the CDC say the delta variant was "just as transmissible as" the chickenpox?

For one, the leaked document underestimated the R0 for chickenpox and overestimated the R0 for the delta variant. "The R0 values for delta were preliminary and calculated from data taken from a rather small sample size," a federal official told NPR. The value for the chickenpox (and other R0s in the slideshow) came from a graphic from The New York Times, which wasn't completely accurate.

"At the end of the day, this delta variant is much more transmissible than the alpha variant," the official added. "That's the message people need to take from this." The official requested anonymity because they were not authorized to speak to the media on this topic.

The difference between an R0 of three and six is massive. For example, with the original strain of SARS-CoV-2, one person would infect about three people, and each of those people would infect three more. So after only two rounds of transmission, cases would rise by nine (3 x 3 = 9). After three rounds, cases would rise by 27 (3 x 3 x 3 = 27). But with the delta variant, the first person would infect six others, who would each then infect six more people. So after two rounds of transmission, cases would already rise by 36 (6 x 6 = 36). After three rounds, cases would surge by 216 (6 x 6 x 6 = 216).

With an R0 of six, delta will be extremely difficult to slow down unless populations reach high levels of vaccination, Wenseleers says. And even then surges in cases will still occur, as is now happening in Iceland and parts of the U.S. The vaccine is less than 90% effective at stopping infections with delta, meaning at least 1 in 10 people could have breakthrough infections. And vaccinated people can still spread the virus. In addition, people who aren't vaccinated have a very high risk of infection, Wenseleers says. "Anyone that chooses not to get vaccinated will in all likelihood get infected by the delta variant over the coming months."

For example, in San Francisco, daily case levels are rapidly rising toward those seen last winter despite the fact that more than 70% of the population is vaccinated, per San Francisco Department of Public Health reports.

Although cases of delta are inevitable, hospitalizations aren't, Wenseleers points out. "As long as people would get vaccinated, then we will not get huge wave of hospitalizations." For example, the city of San Francisco has had 3,041 people hospitalized with COVID-19 since March 18, 2020. Only 16 of them were fully vaccinated.

A leaked and then widely circulated document from the CDC claims that the delta variant of COVID is as transmissible as the chicken pox, but is that accurate? NPR's Michaeleen Doucleff looked into it.

MICHAELEEN DOUCLEFF, BYLINE: One way scientists measure how contagious a disease is is by using what's called the R0. Karthik Gangavarapu is a computational biologist at the Scripps Research Institute. He says R0 is the number of people each sick person will infect on average when the entire population is vulnerable to the virus. Nobody has had it. Nobody is vaccinated.

KARTHIK GANGAVARAPU: So given ideal conditions for the virus to spread, if it's a completely susceptible population - no one has any immunity - then yes, that would be the expected number of secondary infections caused by one primary infection.

GANGAVARAPU: One person ends up infecting two other people.

DOUCLEFF: And the flu has an R0 between one and two. So on average, each person passes it on to one or two people. What about SARS-CoV-2? When the coronavirus first emerged in 2019, it was slightly more contagious than flu. Then in December, the delta variant emerged in India. Tom Wenseleers is a biostatistician at the University of Leuven in Belgium. He was one of the first scientists to recognize how dangerous the new variants could be. He says the delta variant is much more contagious than the original strain of SARS-CoV-2. Its R0 is more than double.

TOM WENSELEERS: For the delta variant, it's now calculated at between six and seven, so 6 1/2 is probably about right.

DOUCLEFF: And so what does that mean in practice? First off, it means the delta variant is not as contagious as the chicken pox, as the CDC's document claimed. Wenseleers says that statement was a bit of an exaggeration.

DOUCLEFF: So chicken pox is incredibly contagious. Outbreaks are explosive. There is a big difference between an R0 value of 10 for the chicken pox and an R0 value of 6.5 for delta. So why did the CDC make that claim? A federal official told NPR the claim was, quote, "based on preliminary data with a small sample size. More data are coming, but at the end of the day, the message is the same. The delta variant is much more transmissible than previous versions of the virus," end quote. Wenseleers agrees. He says an R0 of six or seven is still very, very high, especially for viruses that infect the respiratory tract.

WENSELEERS: Yeah, intrinsically, of course, it is true that this delta variant now is - for respiratory virus, it's probably the most contagious one that we know about.

DOUCLEFF: Wenseleers says that with an R0 of six, delta will be extremely difficult to stop. To slow it down, communities need to have a very large percentage of the population vaccinated. Those who are not immunized have a very high risk of catching this version of the virus.

WENSELEERS: Anyone that chooses not to get vaccinated will in all likelihood get infected by the virus in the coming months.

DOUCLEFF: If you are vaccinated, data continue to show that you are well-protected against hospitalization and death, even with the delta variant.