Unvaccinated people have an up to 97% reduced risk of contracting COVID-19 as more of their family members gain immunity through vaccination or infection, study finds

Unvaccinated people are less likely to contract COVID-19 if members of their family have some sort of immunity against the virus, a new study suggests.

Researchers from Umeå University, in northeast Sweden, found Covid vaccines not only protect people who have received the shot, but others around them as well.

If an unvaccinated person within a five person family unit - with the other four members either having received the jab or acquired natural immunity via infection - their risk of contracting the virus was reduced by 97 percent.

There was also a direct correlation between the share of family members vaccinated and a lowered risk of infection. 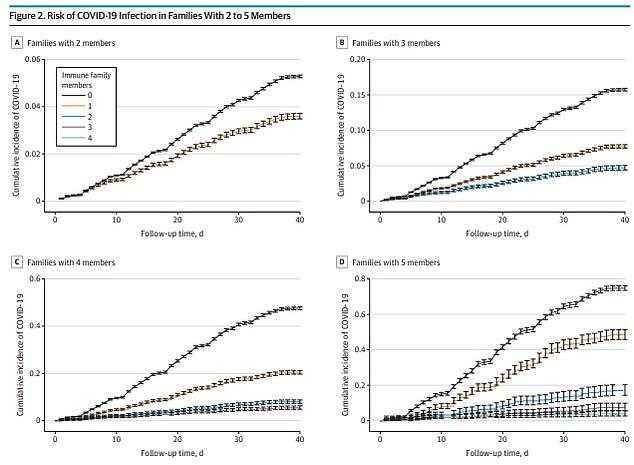 Living in a family with multiple people having immunity to the virus reduced the risk of catching the virus for non-immune people. Researchers found that four immune people within a five person family reduces risk for the other person by over 97% (bottom right). The risk of infection increases as less people in the family get jabbed 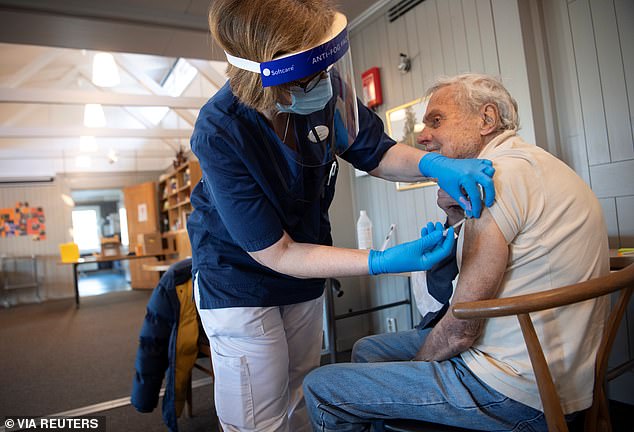 Experts believe the target for herd immunity is 80% of a population having immunity to the virus, though emerging strains of the virus could set that number higher. Pictured: A man in Stockholm, Swede, receives a shot of a COVID-19 vaccine in March 2021

'The results strongly suggest that vaccination is important not only for individual protection, but also for reducing transmission, especially within families, which is a high-risk environment for transmission,' said Peter Nordström, a professor of geriatric medicine at Umeå University, in a statement.

Researchers, who published their findings in JAMA Internal Medicine on Monday, gathered data from 1.7 million people spread across 814,806 family units in Sweden.

Each family was made up of between two and five people.

The team used infection and inoculation data to determine how many people within each household had some sort of immunity from the virus - whether through natural antibodies from infection or from having received the vaccine.

All of the households included in the study had at least one family member that did not have immunity, and researchers calculated their likelihood of catching Covid.

Having three members of a four- or five- member household with immunity reduced the risk of infection by more than 90 percent for the unvaccinated person as well.

Two members of a household having immunity reduced overall risk of infection by at least 75 percent, and one immune person in the family cut the risk by nearly 50 percent.

Herd immunity is a well-known concept, and the researchers say the findings prove that the combination of protection from the Covid vaccine and natural antibodies can prevent infection in even non-immune people.

'It seems as if vaccination helps not only to reduce the individual's risk of becoming infected, but also to reduce transmission, which in turn minimizes not only the risk that more people become critically ill, but also that new problematic variants emerge and start to take over,' said Marcel Ballin, co-author of the study and doctoral student at Umeå University.

'Consequently, ensuring that many people are vaccinated has implications on a local, national, and global scale,'

Experts believe the mark for herd immunity for Covid may be around 80 percent of the population - or four out of every five people - being immune.

The rise of the Delta variant, and the potential for even more powerful strains of the virus arising, could push the target mark even higher.

Currently in the U.S., 65.3 percent of the population has received at least one shot of a COVID-19 vaccine, and 56.4 percent are fully vaccinated.

America is likely closer to herd immunity than the numbers tell, though, with more than 44 million people having tested positive for the virus since the pandemic began last year.

Natural antibodies are only found to last for around seven months, and health officials still urge people who recover from infection to get the shots when they can.